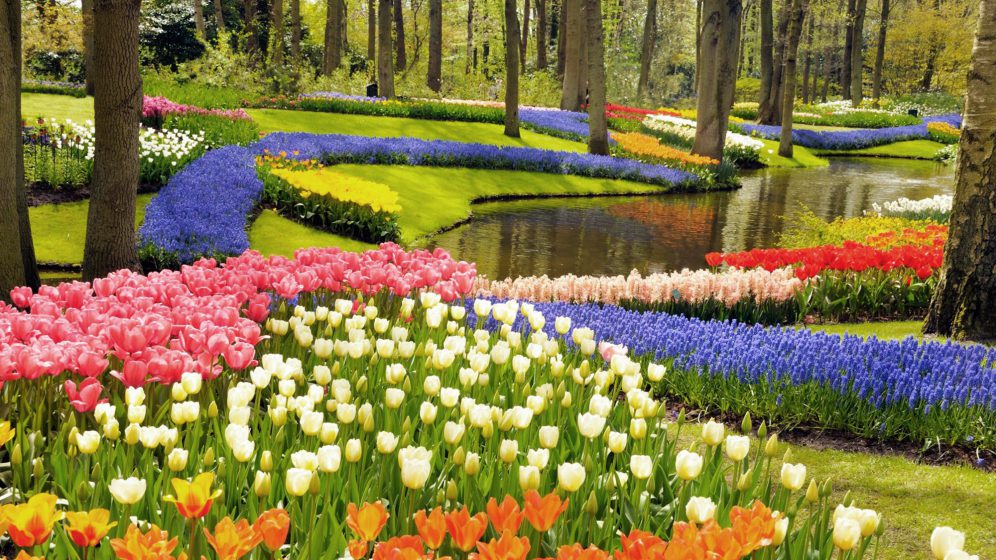 Here is an overview of special events that will take place this year in Lisse or in the region, which are worth visiting in combination with one or more overnight stays at our Bed&Breakfast. The Keukenhof Flower Exhibition is the nicest and most colorful day out! In the coming spring, more than 7 million flower bulbs are in bloom with 800 different varieties of tulips. A visit to this flower exhibition is guaranteed to be a unique and unforgettable experience. Keukenhof is also a big party for children. With a free treasure hunt, a petting zoo, a maze and a playground, they have a great time. The Keukenhof will be open in 2020 from: Saturday 21 March to Sunday 10 May 2020.

You can order your ticket online here.

On Saturday April 25th, 2020 it will be a big party in Holland. That day the world-famous Flowercorso will be passing through the Bulb Region. The large flower parade starts in the morning on the boulevard of Noordwijk and then drives through the flower fields and Keukenhof in the direction of the flower city of Haarlem. The theme for 2020 is ‘Freedom‘. All the floats will be decorated in this theme. The designs of the floats will be announced in February 2020. The designs for 2020 will of course be placed on their website. Broadcaster ‘Max’ will be filming this event in the center of Lisse. The parade will arrive around 3:20 pm in the center of Lisse.

To view the whole route of the Flower Parade 2020 click here.

On the 3th of May 2020 the Grand Prix will take place in The Netherlands. Formula 1 is returning to The Netherlands after an absence of 35 years. Circuit Zandvoort will be the venue of the F-1 Dutch Grand Prix. This is a dream coming true for millions of sport fans in The Netherlands! Not only is it a fantastic sporting event coming to the country, but it also gives Dutch fans the opportunity to cheer for their own hero Max Verstappen, Lewis Hamilton and Sebastian Vettel from up close. Circuit Zandvoort is known as a real ‘old school’ track with fast, banked and challenging corners, shaped by the natural dunes. By car the circuit is a 30-minute drive (22 KM) from The Oude Pastorie, but due to the fact that there will be a large crowd for this event visitors are advised to travel with public transport.

The Eurovision Song Contest 2020 will be held in Rotterdam in May 2020, after Duncan Laurence’s victory in Tel Aviv. Rotterdam Ahoy consists of three halls with the largest being with a capacity of 15,000, which meets all the conditions set by the European Broadcasting Union (EBU). The Eurovision week will have three shows: The Semi-final 1 on Tuesday, 12th of May 2020, the Semi-final 2 on Thursday, 14th of May 2020 and the Grand Final on Saturday 16th of May 2020. Rotterdam Ahoy is a 40-minute drive away from Lisse, which makes it a good option for your stay.

Instead of one host nation, The 2020 UEFA European Football Championship, commonly referred to as UEFA Euro 2020 will be spread over a dozen venues across Europe. It is scheduled to be held in 12 cities in 12 European countries from 12 June to 12 July 2020. Portugal are the defending champions, winning the previous edition in 2016. The Johan Cruyff Arena in Amsterdam is one of the venues where some matches of the groupstages and one in the round of 16 will be played. Also, the International Broadcast Centre (IBC) (also known as the headquarter for broadcasting the Euro 2020), where the TV footages from all stadiums are broadcasted to the television channels around the world, will be located at Expo Haarlemmermeer in Vijfhuizen (The Netherlands). Both locations are very close to Lisse, which makes the B&B the ideal place to stay for football supporters, journalists and other media related specialists.

Mayflower 400, The Pilgrims to America  |  Leiden

The year 2020 is the commemoration that exactly 400 years ago a group of refugees left with the ship ‘Mayflour’ to America to found the ‘Plymouth Colony’ there. Nowadays these migrants are known as the Pilgrims. A part of these Pilgrims came in the 16th century from England. This group of Protestants wanted to separate themselves from the church community, but the English king was not happy with this idea. That is why they decided to flee to other cities, including Leiden. Here they could live freely from religious persecution by the English king. The Pilgrims lived in Leiden for twelve years, after which a part of this group departed to America in 1620. A total of 57 Pilgrims boarded the boat ‘Mayflower’, which arrived months later in the port of Massachusetts (Boston). The arrival of this ship has played an important role in the American history. The group is seen as the founding fathers of the United States, which today has around 25 million American descendants. This year the city of Leiden will organize various events and activities around this commemoration.

Click here to read more about the story of the Mayflower.

Every year The Netherlands celebrate King’s Day on 27th of April, which is marked as the birthday of the Dutch King Willem Alexander. This day is charactirised as an orange-filled celebration with music, street parties, flea markets, fun fairs and festivals all over the country. The King’s Day (previously known as Queen’s Day) is renowned for being one of the biggest and most colourful festivities in the Netherlands, especially in the capital city Amsterdam. Lisse is very close situated to Amsterdam, Haarlem and The Hague, which makes The Oude Pastorie perfect to combine your stay with a celebration of King’s Day in Amsterdam or one of the nearby cities.

Click here to read more about King’s Day and all the activities in Amsterdam and other cities.

The town of Lisse and the Floral Region offers a diversity of tourist attractions, day trips and different activities for all ages. Enough reasons to explore Lisse.

Beside the known attractions, the municipality of Lisse organizes a variety of activities for tourists as well as locals every year. The following agenda gives you an idea of the variety of events that take place in Lisse:

Lisse has a relatively active community regarding organizing events. Besides the annual events mentioned above, the library of Lisse, Theater Floralis, Ter Specke Sportshall, the neighborhood center Savatori, Keukenhof Castle and Museum the Black Tulip also organize events for people of all ages. These events are not listed in the above overview, but can be found on the website of VVV Lisse.

The Keukenhof in Lisse is the biggest flowergarden in the world with seven million bulbflower each year. It is one of the most beautiful attractions in The Netherlands, which attracts countless of tourists from foreign countries each year in the months: March, April and May. The Keukenhof is good for more than one million visitors annually. The coulorful bulb fields consists of various spring flowers like: Crocuses, Daffodils, Tulips, Hyacinths and Lilies. The Keukenhof will be open in 2020 from the 21st of March till the 10th of May 2020.

Museum The Zwarte Tulp takes you on a journey into the rich flower bulb culture: age-old history, working on land with its seasonal rhythm, scientific research, export and tourism promotion. The museum also shows how, over the centuries, artists – and still today – have been inspired by plants to create work of exceptional beauty.

The museum exsists since 1985 and is housed in a building in the center of Lisse that once served as a bulb shed. Parts of the museum are the early 20-century boardrooms of Kalkzandsteenfabriek Van Herwaarden BV, called the Comparitie, and the museum garden where a variety of flowers thrive during the season. The museum also has a shop and there is the opportunity to drink coffee, tea or soft drinks.

Walking and cycling in and around Lisse

Walking
Discover this beautiful region on foot via the Bollenstreek Hiking Network. This is a network of walking routes in the Bollenstreek and works with a junction system, just like with bicycle junctions. There are panels with route maps, checkpoints and information about the area at various starting points and along the routes. Along the way, posts show you the way from junction to junction. In this way a total of 100 kilometers of signposted walking routes have been made.

The routes run mostly on paved paths, but also on dikes, meadows and bulb land. Nature is close by, you will see plants and flowers and you shall hear the birds singing. To give you a helping hand, crossings and bridges have been made. Adventurous ferries provide a crossing in a number of places.

For more information about the walking routes, click here.

Cycling
The Bulb region is a paradise for cyclists, with beautiful dunes, wide beaches, pleasant terraces and various nice places for sightseeing. With the extensive cycle junction network you can easily map out the most beautiful routes yourself. The Duin- en Bulb region is connected to the network of Touristic Transfer Points (TOPs), ideal starting and parking locations for a bike ride.

For more information about cycling in the Bulb Region, click here.

The Oude Pastorie works together with Route.nl, which also provide a couple of cycling routes through Lisse. Click here to discover these beautiful routes.

Sailing in the Bulb Region

The ‘Hollandse Plassen’ is situated between Leiden, Amsterdam and Utrecht. It is an attractive sailing area consisting of the Westeinderplassen, the Nieuwkoopse Plassen, the Kagerplassen and the Braassemermeer.

The region of the Hollands Plassen and The Bulb Region provides a netwerk of lakes and canals, which offer good sailing oppotunities. The distant views from the water over the lower and open landscapes, in combination with historic towns and villages, make this area ideal for water recreation. The large lakes offer plenty of room for water sports.

For more information about sailing in The Bulb Region, click here.

Dutch Grand Prix 2020  |  Zandvoort
On the 3th of May 2020 the Grand Prix will take place in The Netherlands. Formula 1 is returning to The Netherlands after an absence of 35 years. Circuit Zandvoort will be the venue of the F-1 Dutch Grand Prix. This is a dream coming true for millions of sport fans in The Netherlands! Not only is it a fantastic sporting event coming to the country, but it also gives Dutch fans the opportunity to cheer for their own hero Max Verstappen, Lewis Hamilton and Sebastian Vettel from up close. Circuit Zandvoort is known as a real ‘old school’ track with fast, banked and challenging corners, shaped by the natural dunes. By car the circuit is a 30-minute drive (22 KM) from The Oude Pastorie, but due to the fact that there will be a large crowd for this event visitors are advised to travel with public transport.

Castlefest
Castlefest is a festival that attracts nearly 40,000 visitors every summer. Since 2015 there is also a winter edition of the festival. All activities and decorations are in the style of Castlefest. The Winter edition is held on the New Plantation of Landgoed De Keukenhof. During the Castlefest there are different bands on 2 stages, there is an extensive market, there are old crafts, exciting stories, fantasy writers, spectacular shows, atmospheric fires and more!

Open Monument Day
Luxury country houses, forgotten maintenance sheds, proud castles and intimate farmhouses. The Netherlands will open its doors en masse on Open Monument Day in 2020 with special attention to the theme In Europe. It is the chance to visit a place that is otherwise not open to the public or to participate in a special activity or tour. Whether it is that secret garden behind the monastery walls, that closed villa at the end of the street or that monumental canal house in the capital, on Heritage Day you can see history come alive. More than four thousand unique monuments will be accessible to everyone free of charge on the weekend of 8 and 9 September 2018.